Skip to Main Content
It looks like you're using Internet Explorer 11 or older. This website works best with modern browsers such as the latest versions of Chrome, Firefox, Safari, and Edge. If you continue with this browser, you may see unexpected results.

An introduction to some commonly used metrics for determining the influence of published research.

How to Find Journal Metrics in Scopus

CiteScore is a method of measuring the citation impact of journals. It calculates the average number of citations to documents by a journal over four years, divided by the number of the same document types indexed in Scopus and published in those same four years. 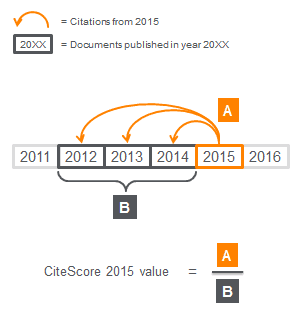 Scimago Journal Rank (SJR) is created by Scimago Lab and calculations are based on data from Scopus. The SJR attempts to account for the prestige of the source of the citation (e.g. it is better to be cited by New England Journal of Medicine than it is to be cited by a less renowned title.

SNIP is similar to impact factor but with citations being 'normalized' to account for differences in citation patterns among different fields of study. It does so by comparing each journal’s citations per publication with the citation potential of its field, defined as the set of publications citing that journal. SNIP therefore measures contextual citation impact and enables direct comparison of journals in different subject fields, since the value of a single citation is greater for journals in fields where citations are less likely, and vice versa. SNIP is calculated annually from Scopus data

The Impact Factor (IF) was originally devised by Dr. Eugene Garfield as a tool for librarians in measuring roughly the "quality " of scientific journals when considering cancellation or acquisition.

The IF has been given another role, as it is frequently used to evaluate individual departments or researchers, a role Dr. Garfield explicitly rejected.

The IF results from a calculation: A/B, in which A is the number of times articles in a journal were cited in journals in the WoS database during the two preceding years and B is the total number of citable items published in that journal for the same period. The quotient of this division is the IF. So if a journal received 20190 citations during the period, and published 691 citable items. The IF is 20190 /691=29.218.

The use of Impact Factor data has drawn some criticisms:

Note: The Library does not have access to Journal Impact Factors.

Eigenfactor analysis is similar to the Page Rank algorithm used by Google to arrange search results by relevance.

It was derived by Carl and Theodore Bergstrom of the University of Washington.

In Page Rank, web sites having  numerous links to them  rank more highly than those that have fewer. The assumption is that each link is a kind of vote, and those sites for which many people have voted must be important to the query.

The Eigenfactor score ranks journals according to roughly the same principle. Journals with many citations from influential journals are rated as  influential themselves. Mathematical techniques of some complexity are used to determine the "Eigenvector" or measure of central tendency, and to rank the journals.

Proponents of the Eigenfactor claim it overcomes some weaknesses in the Impact Factor method:

The Eigenfactor analysis attempts to measure relative influence of journals. Extension of Eigenfactor scores to individuals or departments exceeds the aim of the metric.

The Article Influence determines the average influence of a journal's articles over the first five years after publication.  It is calculated by dividing a journal’s Eigenfactor Score by the number of articles in the journal, normalized as a fraction of all articles in all publications.  This measure is roughly analogous to the 5-Year Journal Impact Factor in that it is a ratio of a journal’s citation influence to the size of the journal’s article contribution over a period of five years.